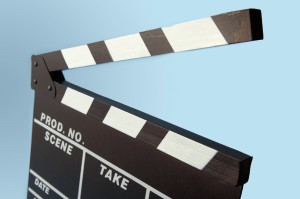 Perhaps the trailer for my new book Grace Note that I posted in part 1 of this book trailer discussion is the only one you’ve ever seen.  But take my word for it: there are thousands for book trailers around.  Just visit booktrailers or book trailers for readers or book screening  to see what I mean.  And that’s just the tip of the iceberg.  But the question still remains:  Is there a point (or bottom line enhancement) to this new addition to the book marketers’ strategies?

I did a bit of empirical research on this question.  Sound impressive?  I posted a couple of questions on a couple of book sites to ask these avid readers if book trailers ever influence their book-buying.  The general theme of the comments was a resounding “no.”  A couple of responders, though, did suggest that book trailers might influence their selection of non-fiction more strongly than fiction.  Perhaps that’s because it’s perceived that a book trailer might provide some information that would help you to see what’s inside the book like we used to do when we all browsed bookstores.  However, with those nifty “see inside the book” options on web-based bookstores, we already get that experience.

As hard as I’ve tried, I have been unable to unearth any credible stats on the success (or lack thereof) of book trailers in promoting new books.  There are vague references to engaging younger readers such as teens by using this visual medium via YouTube, and further references to placing book trailers into movie previews in theaters, although I would wager a guess that this would likely confuse the audience.  Is it a movie?  Is it a book?

A 2008 article in the industry publication Bookseller discussed how book publishers were at that point finally becoming aware of the potential of social media in selling books.  At that time, author Hannah Davies suggested that, “Publishers are starting to prove their online credentials, despite initially lagging behind other creative industries in the development of user-friendly and content-rich websites.”[1]  That lag in the book selling industry doesn’t surprise me much given my 20+ years of experience as an author within the traditional publishing industry.  She quotes the results of a study by the PR firm Fleishman-Hilliard who studied the buying habits of 5000 people and concluded that “…the internet has eight times the impact of traditional print media on the average consumer’s buying decisions.”  That’s interesting and probably sufficient
rationale for using web-based marketing, but it still doesn’t support book trailers per se.

It seems that the publisher Wiley was one of the first to use videos to promote books by posting an early  series of videos on YouTube to support its business and personal development titles.  This might be the reason that one of the responders to my informal survey indicated that she might buy a non-fiction book while another one said that she didn’t even know there were book trailers for fiction.

The frustrating thing about the issue of book trailers is that although they’re fun (and fairly easy to produce) there is no evidence that they actually contribute materially to the success of a book in the market place.  When asked if they are cost-effective, it seems that publishers point to the relatively low cost of a book trailer as part of an essential online publicity campaign, regardless of its effectiveness.[2]

All of this has gotten me thinking:  I think I’ll develop a book trailer for my book Ethics in Public Relations: A Guide to Best Practice the second edition of which was published by Kogan-Page in the UK in 2009.  Should be a real blockbuster, don’t you
think?