I was honoured to be a guest blogger on “A Writer of History” thanks to historical fiction author M.K. Tod whose own work is well worth exploring.

All about historical fiction 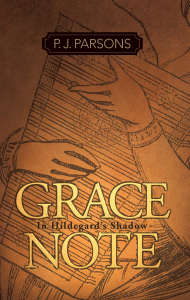 I met Patricia Parsons, author of several non-fiction and fiction works, at my daughter and son-in-law’s wedding. In that strange process of serendipity, Patricia has now moved from Halifax to Toronto and become a friend. Her novel Grace Note: In Hildegard’s Shadow is a compelling story with the premise that Hildegard of Bingen may not have written all the music attributed to her. Today, Patricia muses on the notion of creative cross-training.

A few years ago the magazine Fast Company published a piece by writer Jane Porter (who writes both fiction and non-fiction herself) called “Five Ways to be Inspired by Your Everyday Life.” Her suggestions about feeding our curiosity, learning to manage risks, un-programming our thinking, using creative exploration and scrutinizing the unfamiliar all carried within them a single thread of commonality: each of them suggests to us that inspiration is fired by doing something different

Today is my birthday.  I’ve never been daunted by the number of candles on the cake.  I am the age I am, I’ve always thought.  Twenty, thirty, forty – they were just numbers.  But July 10 is always New Year’s Day for me.  How I take stock of the year has evolved over the years, though.

Several years ago (perhaps more than several now – that’s what birthdays do to you!), we experienced the Broadway musical Rent while traveling in New York.  More specifically, my husband and I were dragged there by our then-seventeen-year-old son, the dancer (the one who made me the ballet mom I wrote about in my memoir published a couple of years ago).  For those of you who haven’t had the pleasure, Rent is a modern-day version of the opera La Boheme (sort of).  It is set in an artistic ghetto-like area of presumably New York that’s populated by a variety of down-trodden artists…well, you really had to be there.

The most memorable piece of music in it is a song that you’ve probably heard since.  It’s called

Seasons of Love and it asks the question: How do you measure a year in a life?  There are 525,600 minutes, but that’s not enough, is it?

I measure my years in the things that inspired me: the people in my life, the places we traveled, the things we accomplished, and by the legacy I’ve left.  So, this past year has been full of inspirations – inspirations that should begin to populate my writing and my other work.

I could write a book about a trans-Atlantic ocean liner, since I started my year on a Queen Mary 2 voyage.  Or perhaps I could pair this with the historical Queen Mary which I visited in California later in the year, and write about a stowaway in the late 1930’s.  Or maybe I could write about a Canadian dancer in Europe (heaven knows I traveled part of this year’s journey with one).  Maybe I could write a travel book about cruises – it seems to be the subject so many web surfers are interested in.  Or maybe I’ll write about an accidental university professor – because that’s what I am!

In the end, I think I’ll spend today thinking about all of this and contemplating Murray McLauchlan’s song The Second Half of Life.  Because as he says, that’s when the fun begins.  “The most important time may not be from nine-to-five…”  Oh, he is so right! Now that’s a great name for my new book.

I am a woman who would rather poke her eyes out with a red-hot poker than spend an evening with a bunch of women.  The ubiquity of magazine articles extolling the virtues of our ‘girlfriends’ have never resonated with me.  My girlfriend preference is for the arms-length, mentor type.  And one of those women whose work has inspired (and I daresay influenced me) died last week.  I’m talking of course about Nora Ephron.

I don’t think that her influence on me was in my conscious mind until I read about her death and thought, “We’ve lost a good one.”  Then I started thinking.

In all of my writing (of the non-academic type), my protagonists (whether fictional or real) are strong women, feminist types, ahead of their times or just plain wise.  Although she may have been best known to the masses as a screenwriter, it wasn’t her movies that inspired me – it was her journalistic career and her books.

I first read Heartburn in 1983 or ’84, soon after it was published.  Relating a seriously funny take on the break-up of a perfect marriage, the book resonated with me partly because I had escaped a (less-than-perfect) marriage myself only a few years earlier, and I found her witticisms so spot-on that she captivated me for the long-term.  When I think about some of her most valuable pieces of advice over the years, I’m almost alarmed how much I agree with her.

When she said, “I am continually fascinated at the difficulty intelligent people have in distinguishing what is controversial from what is merely offensive,” I found myself nodding in agreement.

And then there was advice for living: “Oh, how I regret not having worn a bikini for the entire year I was twenty-six. If anyone young is reading this, go, right this minute, put on a bikini, and don’t take it off until you’re thirty-four.”  Yes, I should have done that.

But of course, she also said, “Above all, be the heroine of your life, not the victim.”