A few weeks ago I picked up a book that I didn’t realize was about deadlines.  Okay, I now recognize that Chris Baty’s entertaining little book No Plot? No Problem isn’t supposed to be about deadlines, but it is.  Baty, the creator of the National Novel Writing Month says this in the first chapter:

Deadlines are the dynamos of the modern age.  They’ve built every city, won every contest, and helped all of us to pay our taxes reasonably close to on time…a deadline is…optimism in its most ass-kicking form…a potent force… (p. 26)

…and it occurs to me that I’ve been sympathetic to this point of view for many years.  Just ask my students!

A deadline changes everything about any project that you plan to implement.  It moves you past the planning stage and drops you head first into the implementation phase, forcing you to consider milestones along the way.  And when the deadline is imposed by an external force (like your boss or your professor or your editor) those deadlines take on even greater importance.  Or do they?

I have about a dozen writing projects on the go right now.  Some of them are actually academic (low on the priority list at this point in my career), some of them are creative, and some of them are strictly personal.  The one project that gets done every week is my contribution to the travel blog I write with my husband.  Why?  Because I have a self-imposed deadline.  I made a personal commitment to a certain number of posts at certain intervals when we started on this project (which will become a book in due course) last fall, and I have neither looked back nor shirked my deadlines since.  The truth is that I have never missed an externally-imposed writing deadline, and now it occurs to me that when I have actually taken the time to create personal deadlines, my work has progressed faster and more efficiently than the more organic, artistic approach to work schedules that seem to be common among the ‘creatives’ of the world.

Case in point: I had almost forgotten, but a number of years ago I decided that I’d take a foray into screen-writing.  I think it’s because I see plot and dialogue as a kind of film running through my head when I write narrative, so I thought I might capitalize on that tendency.  I registered for a script-writing course, and set about learning the nuts and bolts of the process (not to mention learning about the paranoia that seems to run rampant through the film industry: no one wanted to share their ideas for fear of them being stolen – this never seems to happen in the world of books!).  After the course was finished, I had a notion of script framework, ideas and scraps of dialogue, but not much else.  So, I did what I always do, I bought a book on script-writing. 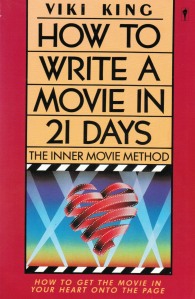 In fact, I bought several, but the one that really got me to a different level is not Robert McKee’s classic (and wonderful)  book titled Story; rather it is a small book called How to Write  Movie in 21 Days by Viki King.  I followed her framework for getting to a finished 90-minute script in 21 days and it worked.  I have the proof of it sitting in a drawer just waiting for a producer/director to snatch up Something I’m Supposed to Do.  But I had not noticed that her admonitions about deadlines really got inside my head.  In fact she says, “…your deadline…is your friend.  Focus to reach your deadline.  Make it your priority.  Sleep, food and phone are secondary to the deadline…” Okay, this was published in 1988.  These days she would have had to add a list of social networking sites to avoid – but I digress.

The bottom line is that if I impose a deadline on myself, I get it done.  It’s time I stopped flailing about trying to get the parts of my new novel (actually novels, and articles, and blog posts) perfect, and just get them finished.  There will always be time for editing later – with an editing deadline, of course!

Novelist Rita Mae Brown said: “A deadline is negative inspiration.  Still, it’s better than no inspiration at all.”

One thought on “The beauty of a deadline… (OK, don’t shoot me!)”