I was perusing my bookshelf this morning (in truth I was looking for a couple of books with the right spine width to wedge under a door my husband was re-installing – but I digress), when I happened upon one of my favourite old books. Over the years I’ve culled my book collection mercilessly, but there are a few that still remain on my shelf. Written by literary agent John Boswell, this one has remained one book that I do re-read from time to time, just to keep me grounded as a writer. 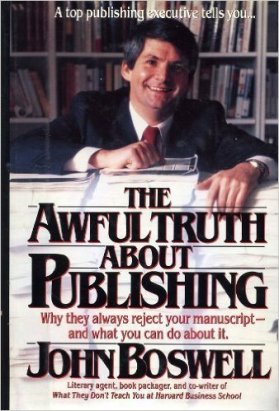 It is titled The Awful Truth About Publishing: Why they always reject your manuscript – and what you can do about it. In spite of its age (it was published in 1986 by Warner Books), and the concomitant fact that it was published long before the advent of the eBook era and the avalanche of self-publishing, it remains one of the best reads to help a writer with her head in the clouds to keep her feet on the ground – which is the only place to be if any real success is to follow.

As I cracked the cover (hard cover at that) I opened the book at Chapter 4: “The Awful Truth About Yourself.” And it does seem to me in these days when the “cult of the amateur” shrouds just about every facet of artistic endeavour (movie-making, music production and, yes, you guessed it, writing) it might be worthwhile for aspiring and other writers to do a bit of navel-gazing. Are we always aware of the truth about ourselves? Based on some of the drivel I’ve read recently, coupled with the book-marketing noise on the Web, it seems that many “writers” are, indeed, blind to some truths about themselves. And I put myself in that category from time to time.

Boswell offers this: “Writing, for the gifted few, is an art, and the chances of reaching this level are about as good as they are of becoming a prima ballerina or a major league second baseman” (The awful truth about publishing, p. 41). I love to be reminded that writing is indeed one of the arts, a factoid that seems to be forgotten by those among us who harp on ‘authorpreueurship’. While I’m all for the notion of self-help even in writing, let’s be clear that if you’re writing a book with the clear objective of making money, then this isn’t art.  It’s content creation and it’s okay. But it isn’t art. Some of my own work – or at least work in progress – seems to bend in that direction, while other work is simply seeing if I can create a piece of art that will entertain and perhaps even provoke.

He then goes on to make a statement that, had he been able to gaze into a crystal ball and see the future of publishing as we know it today he would have realized is even more profound. “Fortunately,” he writes, “…writing is also a craft and one which can indeed be learned by almost anyone. But…it is still not something that can be learned overnight, or a skill that pops into your head, fully honed once you ’get around’ to putting your publishable thoughts on paper…” (p. 41). And here is where it gets really muddy these days.